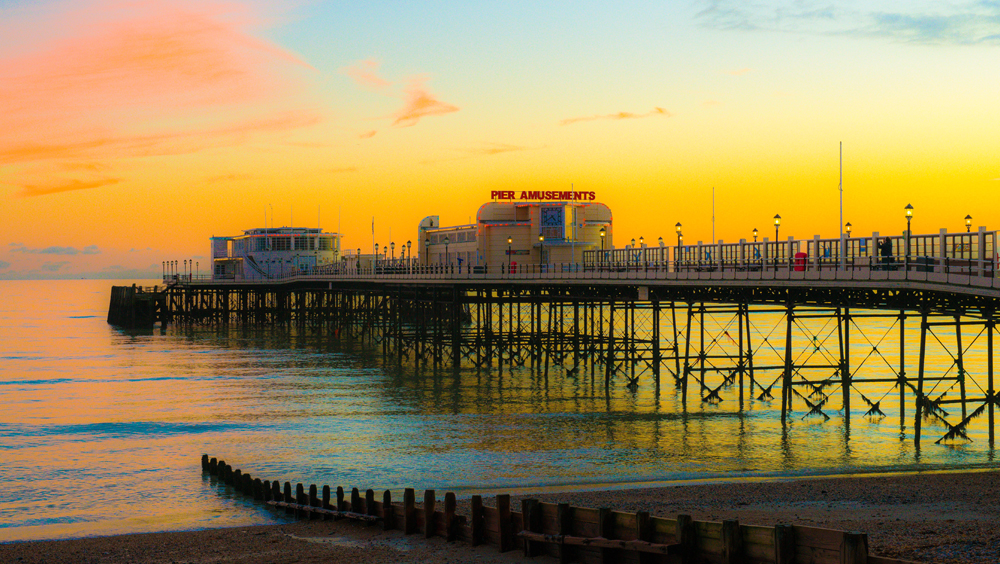 Beating competition from across the UK, Worthing’s Grade II listed Art Deco pier has been named the best in the country in the much-coveted ‘Pier of the Year 2019’ competition. Voted for by members of the National Piers Society, the pier is one of only a handful of piers to have won this prestigious award twice, the last time being in 2006.

In the 23rd annual competition run by the society, Worthing’s iconic seafront landmark stood out against its competitors Clacton and Clevedon which took second and third spot respectively. On winning the award, the Mayor of Worthing, Councillor Paul Baker said, "I’m delighted the National Piers Society has recognised once more what a fantastic pier we have; it really is an iconic landmark for the town."

Generations of holidaymakers and Worthing residents have enjoyed the delights of the pier over the years and continue to do so; with many an hour pleasantly passed by fishing off the pier, playing in the penny arcade, enjoying an afternoon stroll with an ice-cream in hand or simply sitting back in a deckchair and watching the world go by.

The Pier’s History
Originally opened on 12th April 1862, Worthing’s pier was the thirteenth pier to be built in Britain at the cost of £6,500 by the Worthing Pier company. It was initially designed to be a landing stage, but due to its huge success, improvements were added in the form of two new kiosks to house the souvenir shop and tollhouse and later in 1889 the addition of the pavilion that was added to the pier head.

In March 1913 disaster struck, when a huge storm with gale force winds of 80 mph severed the decking between the pavilion and the pier. Regional and national newspapers came up with the nickname ‘Easter Island’, and it became quite the tourist attraction with its own postcard on sale showing aerial views of the wreckage. After considerable repair work, the pier reopened on 29th May 1914 by the Lord Mayor of London.

Worthing Corporation then went on to buy the pier in 1920 for the princely sum of £18,978. 15s and began charging visitors 2d for admission and to listen to the orchestra play in the South Pavilion. In 1926, a shoreward Pavilion opened which was to become home to the Worthing Municipal Orchestra, while the building at the pier head was renamed the Southern Pavilion.

Unfortunately, in the September of 1933, a fire destroyed the Southern Pavilion, leading it to be rebuilt in record time and at the cost of £18,000, before reopening in August 1935. Later additions to the pier 2 years later included an amusement arcade and a central windbreak running the length of the pier.

It was in 1940, during the outbreak of World war II that the pier’s most dramatic transformation occurred when it was deliberately cut in half to hinder any enemy attacks. Once the enemy threat had lessened, the pier was then used as a recreation centre for the troops who enjoyed playing snooker, darts and table tennis.

It reopened to the public in the summer of 1946 where shows including ‘The Fol de Rols’ provided hours of entertainment. In 1959 The Denton Lounge was added and after the Worthing Municipal Orchestra disbanded the Southern Pavilion was used as amongst other things a cinema, model railway museum and even a zoo!

In recent times the Southern Pavilion has been a nightclub and is now a much-loved café, entertainment and wedding venue. It has also played host to the world-famous Worthing International Birdman competition that saw men and women flinging themselves off a pier platform in home-made ‘flying’ machines and costumes. The daredevil who could fly the furthest over 100m was presented a prize of £10,000.

Make a move to Bayside Apartments, and you can enjoy the views of Britain’s ‘Pier of the Year 2019’ from the comfort of your balcony, enjoying a delicious meal in the Southern Pavilion café or watching the sunset while you delight in an evening stroll around the pier.

For further information on Bayside Apartments, to discuss off-plan reservations or to register your interest, you can contact the selling agents Michael Jones on 01903 213 281 or Symmonds and Reading on 01903 235 623, or please email bayside@michaeljones.co.uk.