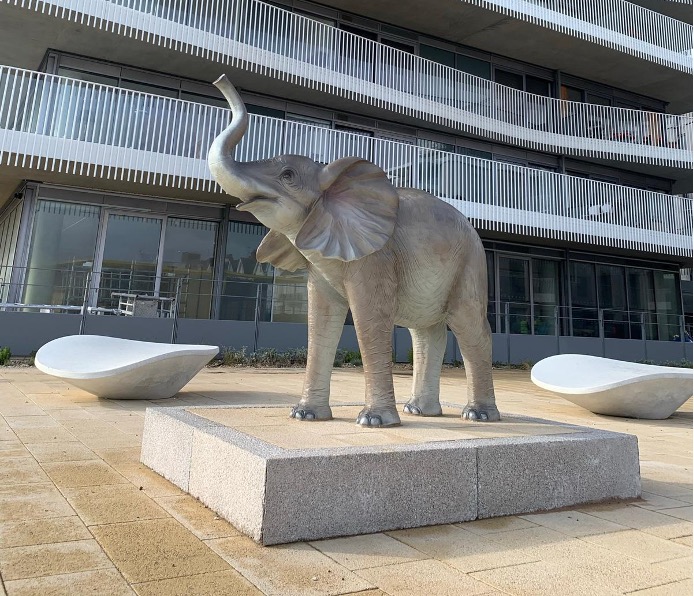 When work first started at the south coasts’ iconic new development, Paul Holden from the Worthing Journal brought to our attention one of Worthing’s strangest discoveries in maritime history, involving a baby elephant that locals affectionately named as ‘Jumbo’.

Nearly 100 years ago, in November 1926, the Worthing Herald reported that two fishermen discovered a baby elephant had washed-up on the beach by Splash Point in Worthing. The elephant calf is believed to have been aboard a ship transporting animals for a travelling circus when a storm hit. The ship sank off the coast of Deal in Kent and the calf sadly drowned at sea.

Due to the proximity of the historic discovery to the development, Roffey Homes, the developers of Bayside Apartments decided to erect a monument and plaque to commemorate the final resting place; a place where residents can pay their respects and find out more about the young elephant’s interesting story.

Ben Cheal, Roffey Homes Managing Director said “We wanted to honour the baby elephant in our own small way as his final resting place was so close to where we have built Bayside Apartments. We wanted to create a beautiful and interesting feature to stand proud in the courtyard garden and this story naturally entwined with the build, we knew we had to have a life-sized model recreated.”

The development of the old Aquarena site started in December 2017, with final sales of the last 3 remaining apartments being agreed in October 2021. The impressive 15-storey development consists of 141 luxury homes, a new seafront plaza and café known as Bayside Social, owned by MasterChef winner Kenny Tutt.